This is a Joey Fun Flyer derivative, the original was designed by Johan Smit. The Joey plan was downloaded from Aerofred and modified extensively for an electric conversion.

The purpose of this particular build was to give me a model for the Inter Club Fun Fly series of events which appear to be gaining in momentum - particularly in the NW of England where I live.

This is my derivative from the original plan, named Kanga, hopefully, it will bounce just as well. 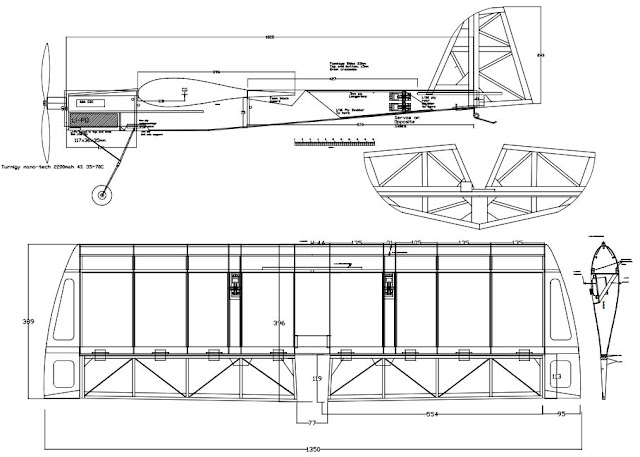 The biggest change to the original design was to extend the fuselage to accommodate the lighter electric motor and LiPo. Mounting the elevator and rudder servos in the rear necessitated a further extension.

Following discussions with Andy Ellison, a few other tweaks were made to make it more rugged and help it survive the rough and tumble of a Fun Fly contest.

Tailplane and Fin
These were built almost exactly as per the original Joey but with 0.014" Carbon Fibre bracing doubler along the tailplane spar and the front of the fin post. Hinges are carbon fibre sheet which also add additional toughness. 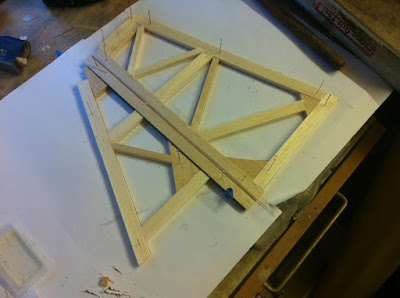 The fin and rudder. Looking carefully, you can see the carbon fibre doubler on the front edge of the fin post 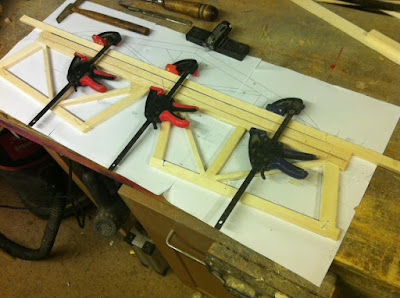 Tailplane construction starts with the pre-hinged spar and elevator joiner. 1.5 mm spruce doublers are inlaid into the joiner that links the two tailplane halved together 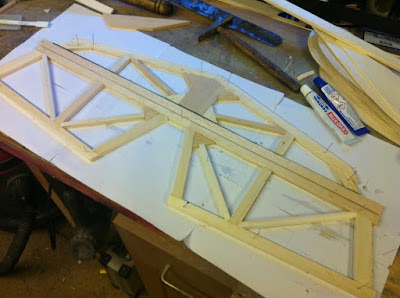 The almost completed tailplane. Hard points for the horns are yet to be added


Wing
The LE and front spars were laminated from 2 x 3 mm sq spruce, the main spar is 6 mm square balsa with a spruce doubler, top and bottom as shown on the original plan. The gap between the ailerons has been increased by 30 mm  and the wing is now retained by bands, rather than bolts as per the original.  A 2 mm carbon fibre rod brace has been embedded into the LE at the centre section (approx 30 mm each side of centre) to prevent dings from forming in the LE if the wing swivels around the fuselage former. Wing tips are 5 mm balsa with lightning holes. The main spar is extended to the tip along with the upper of the rear spars. 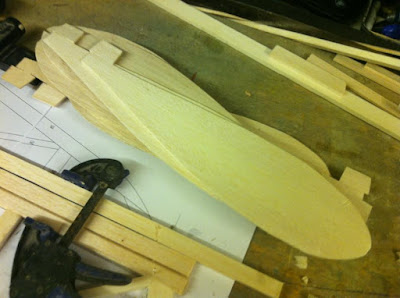 Wing ribs are cut using a ply template. Note the use of building tabs to prevent twists (warps) being built into the wing 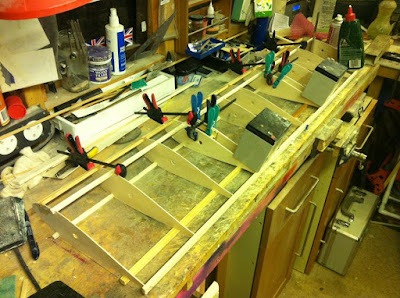 Wing construction is quite simple. No plan is needed, simply mark a line for the Trailing Edge of the wing, then mark out the positions of each wing rib. Pin down the lower spar and then add the ribs, making sure they are upright and square. Add the TE, upper spars and leading edge. 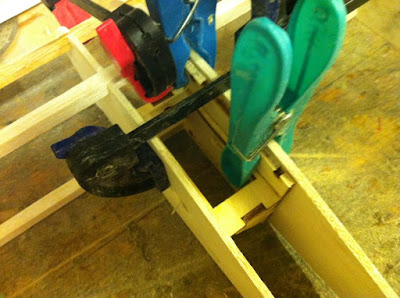 There are two ribs that are close together that  have the aileron servo tray sandwiched between them. Adjust the height so that the top of the servo turret is about 3 mm above the top of the rib. I mounted my servos on the top of the wing for protection, convention dictates that they are located under the wing. 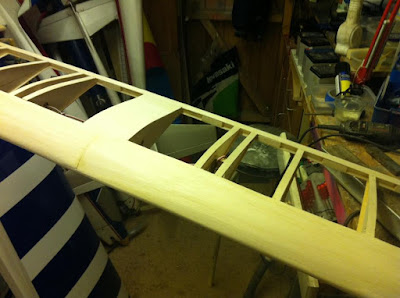 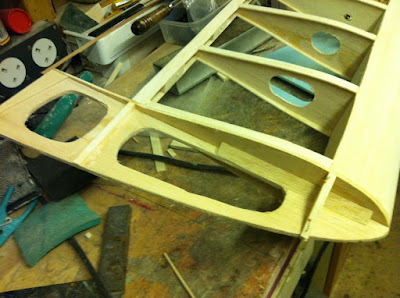 Wing tips are 5 mm light balsa with lightning holes. Note that I have also added lightning holes in the external wing ribs. Every gram counts. A short length of triangle stock to keep the tip square and the spars are extended to the top. At the very rear of the tip, there is a tapered strip of 1/16" ply to add a little extra local strength 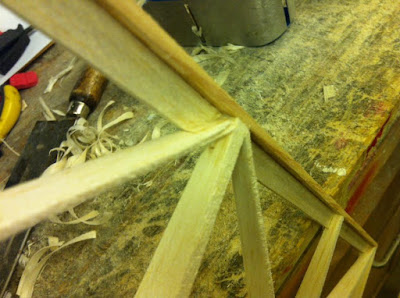 The ailerons are conventionally built. The TE of the Aileron is L shaped with the vertical part made from 3mm x 5mm spruce. Because of the method of construction, I have used conventional hinges for the ailerons, 4 per panel. To ensure that they are secure, 6mm soft balsa blocks have been added at the wing and aileron side to ensure a good glue contact area

A 2.5 mm Lite ply deck sits from behind the front former to half way down the wing and is used to locate the ESC (top behind the motor), LiPo, underneath and Receiver - under the wing.

The former in front of the wing is 3 mm birch ply which interlocks with the deck and also the small 6 mm undercarriage mounting plate.

The engine mount former is also 3 mm birch ply. a third former located at the TE of the wing is made from 2.5 mm Lite ply.

The unusual part of the fuselage is the cut away behind the main part of the wing. This allow the wing to skew without impact the ailerons or risking damaging the aileron servos. It was originally intended to fill this 'gap' with a soft foam block but that was purely for aesthetics. 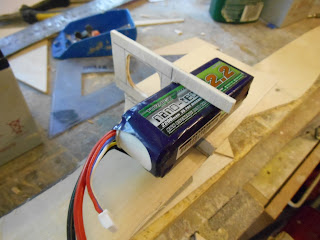 The fuselage was designed around the components that I wishes to use. Trying to save money, I opted for budget end for everything - I wasn't sure that this model was gong to last 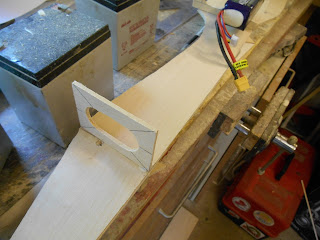 Fuselage construction is the traditional simple box. The cut out to clear the ailerons if the wing got skewed looks quite odd but I have to admit I quite like it. It has Character.. :) 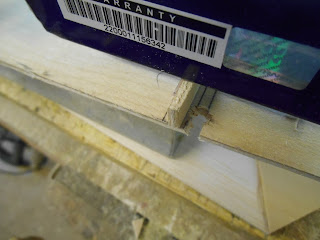 Any Ellison advised me to make the undercarriage strong. It will take a battering. I admit I underestimated strong but I decided to slot the main legs into the fuselage to transfer the impact into the main structure. Where I went wrong was that the front bracing legs were too thin and needed to be reinforced to the same level 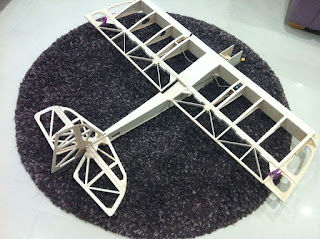 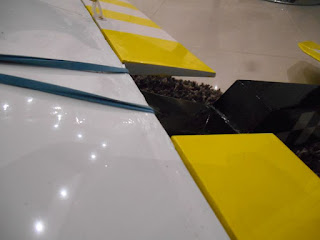 You can see the wing mounted and the slot for the ailerons - to allow the wing to twist on impact and hopefully not rip the ailerons off. 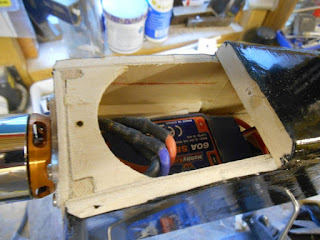 ESC located above the battery in a screwed down hatch 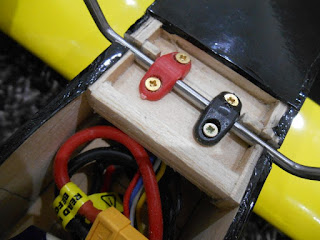 Another shot of the undercarriage main mounting. The legs are screwed to a 3mm ply plate which is integrated into the former above. All locked together 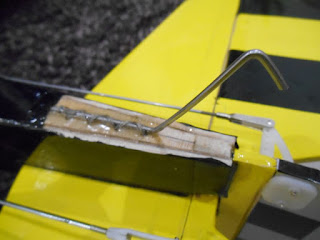 The rear skid is stitched using Kevlar thread to a 3mm plate and epoxied into place. 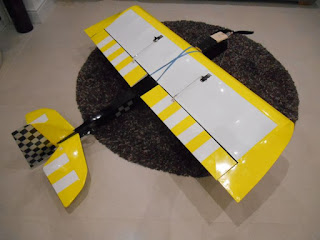 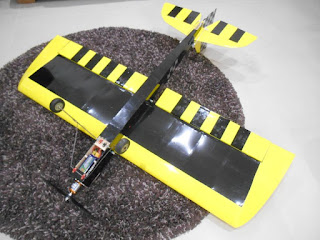 Contrasting colours - probably not needed on this model..

With the model completed, I only managed to get 3 flights in before the InterClub Competion 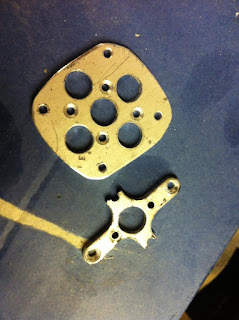 The first flight ended prematurely  when the motor mount broke. Looks like it failed because I hadn't balanced the prop correctly. The replacement is cut from the next gauge up dural. That will not break..

My Inter Club comp flights were great fun but made me realise I had a lot to learn.

1. I had to fly a lot closer in than I normally do. I had problem keeping the model on track and judging the distance away from me. My 4th round Limbo flight ended after I 'took out' the far limbo pole which damaged the firewall but the rest of the model was unmarked... I can see this flying close and judging distance being a problem to me. Practice, practice, practice

2. Its very draggy - but adding more drag showed that I had insufficient power. In the water carry task, the take off was long and I could barely build up enough speed to perform the loop. I have subsequently fitted a larger prop which is within the power capacity of the power train.

3. The undercarriage wasn't strong enough. On the triple thrash (3 Touch and Go, 3 Rolls, 3 Loops) my second T&G removed the front u/c mounting. Easily fixed but it failed far too easily. This has now been replaced with a 12g leg and this is now bolted to the Firewall

After the comp, I replaced the Firewall with 6mm ply (was 3mm ply) and added Carbon Fibre reinforcement. 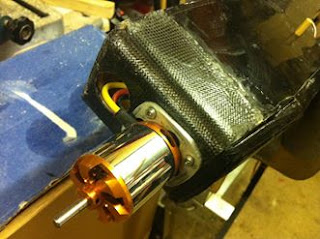 I have had a few more flights including some targeted hard touch and go's and it hasn't failed yet.

My thoughts on the model is that its a bit on the heavy side now - Although not dreadfully heavy, it could do with being 0.5kg lighter. Something to think about for the next version. Its great fun and dead easy to fly though

Roll on the next comp. That was really enjoyable.
Posted by MartynK at 14:01:00 No comments:

I was invited to a local school to talk about Model Aeroplanes.

Their current topic is aviation. The age group is Year 1 (5-6 year old Children)

I wasn't given much time as the room I was given is in fairly constant use. 20 minutes to prepare, 30 minutes to talk, 2 minutes to dismantle and the opportunity to fly from the school playground - which on Google Maps looked quite large.

I agreed with the teacher that I would show a few model related videos (from YouTube) and bring some aeroplanes to show them. The children are multi cultural/lingual and had probably never even seen a model aeroplane before.

I took along a mix of things to show them.

1. A BMFA Dart which I flew in the hall - much to the children's delight
2. 3 Peanut Scale models plus one under construction which I walked around and showed them so they could see how they were made
3. A 2.5m span glider with transparent Solarfilm covering - again so they could see the construction link.
4. A Fun Flier - which is what I flew but with a Mobius Camera attached
5. A 2.1m span aerobatic model. 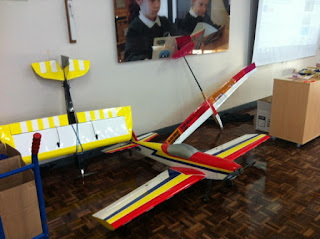 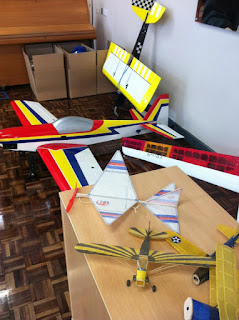 There were about 60 children (2 classes) and they were really well behaved.

The four videos I chose were:
https://youtu.be/RriKI7u72Xs


Wright Brothers early flight. I explained that 100 years ago real aeroplanes were just big models because no one knew how to build full size. I talked about the construction and compared the Wright 'Flyer' with my peanut models - basically sticks covered in tissue/cloth

The second Video showed Aeromodelling in the 1930's. Explained how popular it was because Aviation was still very exciting. Again talked about how models were made and flown.


Finally, a fairly modern MAN video showing a Free Style aerobatic model in flight.  Didn't quite get time to show all this video but it set the flavour and the oohs and ahhs indicated I had got that right

Some of the children were invited to come and pick the models up so they can see how heavy/light they were and invited to ask questions..

We then told the children that I would give them a demo flight and we reassembled in the play ground/field 30 minutes later.

I had agreed where I would fly from and that I wouldn't overfly the school or the Children. Just 2 flights of about 4 minutes each and some aerial photography. It was a perfect flying day, calm and sunny. 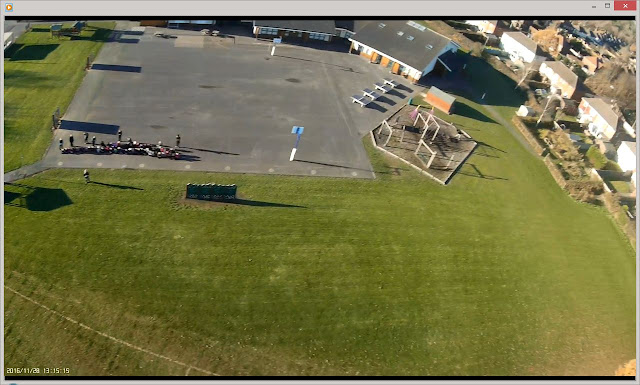 You can see the Children behind me and my no fly zone was from about 10 yards in front of me. Kept the model high and safe and nothing too adventurous.

Apparently the little people were chanting 'Martyn, Martyn' when I was flying but unfortunately I couldn't hear them

A very worthwhile 3 hours of my day. Happily do that again.