A bit more progress. I haven't had much time this week/weekend, so not much to report
First - the wheel wells. Take 2 - and this is what they look like now..

Not quite as circular as I would like but at least there is a reasonable gap now...

The TE extension in the centre of the wing and at the joint between the flaps/ailerons and wing tips have now been added. They have been faced with 1/32 ply. The extension at the root has been built from 1/16 ply inlaid into the false TE. This gives a good strong surface, this carries the wing mounting bolts.

You can see where I have inlaid ply in between the upper and lower sheets to support the TE. The core is solid balsa.. It feels very strong.

I have added the ply end caps to the wing tips. These were fairly straightforward but I have used 1/32 ply instead of 1/16. I think it will be OK, I am trying to save weight now, this wing is starting to feel very heavy.

The last couple of evening have been spent filling dings and generally sanding now the wing surface to get it ready for glassing.

The servos and U/C were removed, the electrics covered and the 60g cloth has been put down on the upper wing surfaces.

This was much more difficult than I imagined, the temperature in the workshop is the wrong side of cool and the Zpoxy was a bit on the thick side despite warming it gently for half an hour before mixing..

I'll leave it for 48 hours to really harden then I'll do the under surface of the wing. One decision I need to make is whether I should add a wing joining tape down the centreline. I am still a bit worried whether it will be strong enough

I carefully fitted the ailerons. I am using the Kevlar cloth as the hinge material so the ailerons are laminated.

The aileron ends are capped with 1/32 ply to keep nice sharp edges.
Then I came to fit the flaps. I cut slots for the torque rods and laminated them with ply.

So far so good. These were slotted to accept the Kevlar cloth, the rods epoxied into place then capped with ply/balsa. They were not going to fall off.

All I had to do was finish off sanding/carving to shape in situ and I broke one of the blooming things.
I was also checking the fit of the wing with the flap servo fitted - and it wouldn't. The torque arms were binding against the elevator servo (which I had anticipated) but even worse, the wing wouldn't fit with the flap servo in place.

Basically, the flap servo was locked against the rudder servo...

What I had done was transposed the position of the flap servo in the wing. Not a huge problem but my patience was diminishing and my temper rising so it was a good time to put it aside to have a think.

The flap has been repaired...

The battery and flap servo has been swapped round

The elevator push rods have been lowered

And everything how fits (although it is very tight for space).
The last 3 evenings have been spent fitting the wing fairings and carving and sanding to shape. A bit frustrating, the plan says refer to the cross section for the shape of the fairing - but there is no cross section..

But - they look OK. Still need a bit more work to complete though. I have also fitted the wing bolt mounting plate.

Once done, it will be time to fit the rudder and the top of the fin and then glass the fuselage..

The fin tip has been added - it looks lovely..

I have glassed the fuselage and fin (using epoxy resin and 60g cloth). Just waiting for it to cure for a couple of days before I start sanding it down. One irritating area is still a bit sticky, left it leaning against the heater in the shed - hopefully that will sort it. When sanded smooth, I'll add a couple of coats of water based varnish to make sure that it is properly sealed then a final rub down with very fine wet and dry and then we are ready for paint.

Just a couple of shots..

This was the fus last night after the first sanding down exercise. I added a coat of Antique pine water based varnish. Looks quite nice

This evening I have spent an hour with the wet and dry.
The dark areas are where the varnish sits in pits

Its actually nowhere near as bad as it looks. Using the fingertip test you can't actually feel the pits although shining a light down the fus will show them up. However, I think that it is ready for high build primer. Halfords here I come.....

A light coat on the fus and the underside of the wing. I am really very happy - there is not much more reworking to do and only a couple of spots that will need a little filler.

No close- ups just a bit of "White Magic".

Up at 06:30 this morning when I remembered that I hadn't built the short fairing that sits under the wing leading edge.

This evening is the first time that the model has been fully assembled. Still lots to do though but I am getting there.

here are a couple of Paint in progress photos:

And the wing. Contrasting colour scheme underneath. (The blue is the same shade by the way - just different lighting)

Got most of the colour finished yesterday - so a quick assembly seems in order.

I have to admit - and I will say this many times - it looks a lot better as a photo than in real life.

I have fitted the rudder last night and covered it this morning - usual for me - black/silver chequerboard.

I also reweighed it last night - assembled airframe with 3 fus servos and 1 flight battery - 2.76kg. It seems a lot heavier than that though. Still needs the engine and retracts and wing servos and 2nd flight battery fitting though.

Not gently rubbing it down with 1200 grit wet and dry - wet - to remove any new high points and flatten it ready for proofing.

Added cooling air outlets on the top deck/tunnel. These are cut from light alloy - actually an anodised 450 sized helicopter boom. The drawing only shows 2 - i have put five on.

Control linkages for the elevators and rudder - not sure where that run came from, but it wasn't there when I investigated later

So, I carefully brushed on 2 coats of this plastic coating and it set beautifully.

No problems at all.. The top of the wing looked a bit patchy so I applied a 3rd coat thinned 50% with the supplied thinners.

The result - crazy paving on the yellow and the red

Gutted. The blue and white seemed to be OK so I masked off and sanded the red and yellow down - several times - because every time I reapplied paint it crazed again.

What made it worse was that plastic coating on the top of the wing started to peel off..
So, a couple of evenings spent removing the film off the top surface with a scalpel and a bit of 1200 grit wet and dry

Eventually, I managed to get the red and yellow back on again without it crazing (too) badly and this time fuel proofed it with Spectra spray gloss - which smells like polyurethane varnish.. However, it went on OK but the wing is now looking a little worse for wear..

Still - onwards and upwards as they say. (However with this build it seems to have been mainly downwards)..

I followed Martin Mc's suggestion about using 6g piano wire for the main legs - which put a real strain on my wire bender.

and it weighs this much..

Maiden and Death of a Classic Aerobatic Airframe


Designed in 1984 in anticipation of the new Turn-Around Schedules, Clive produced this new design which was very different than the current models in vogue at the time.

Built from plans - started in September 2014 this was my winter project. The model was completed just before Easter 2015 and was waiting for its maiden flight. Powered by an OS61VR with tuned pipe with FrSky Taranis providing control 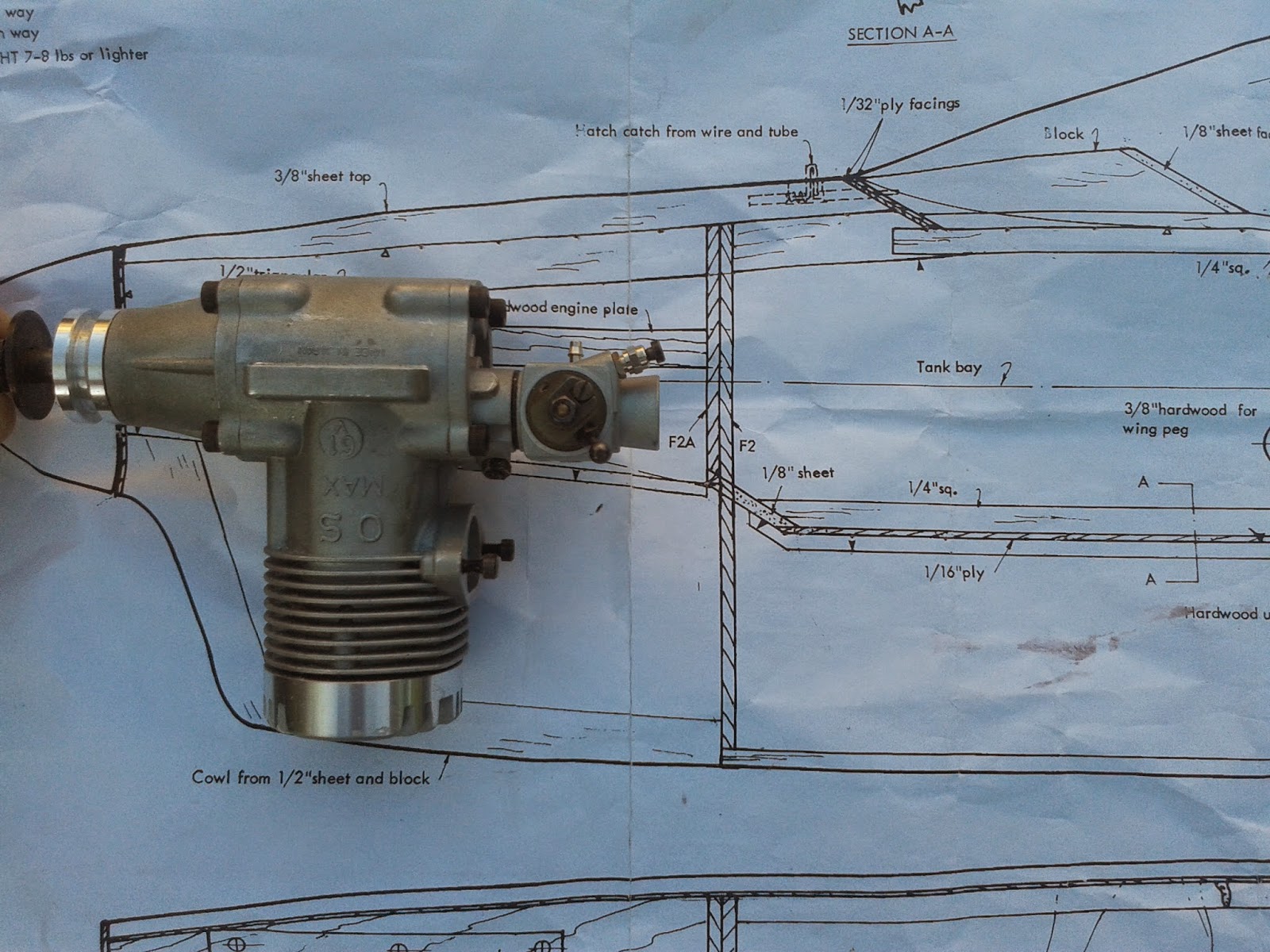 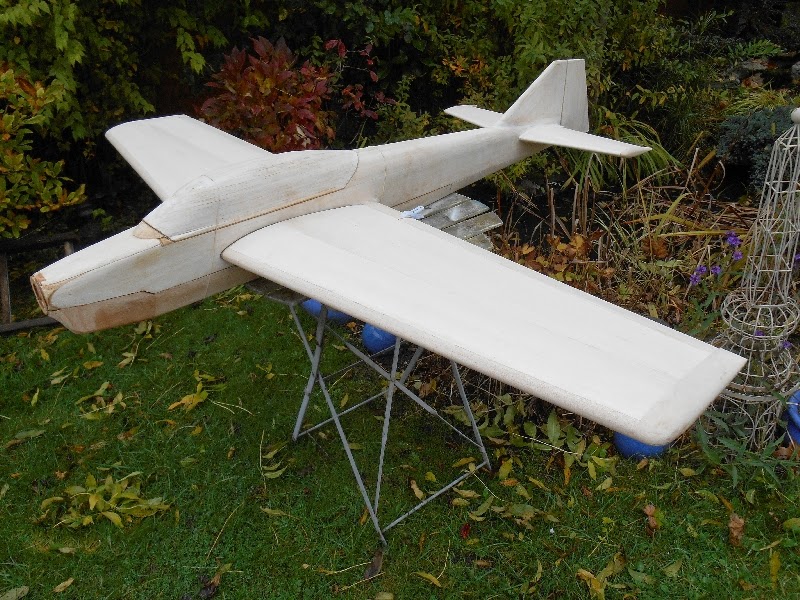 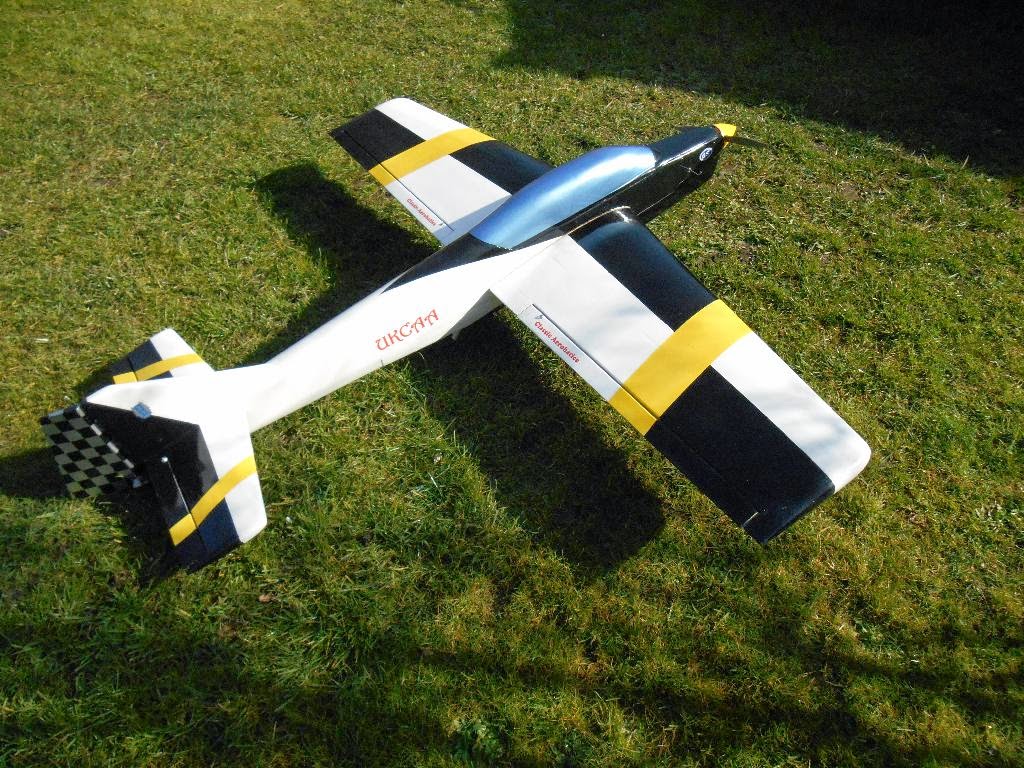 Ready for a Maiden


Got the maiden in last night. Eventually managed to get the engine to run OK, 2 tanks of fuel and reasonable pick up and idle so just before sunset I placed the model on the strip, taxied to the end, lined it up and wound open the throttle.

First impressions was that it is very hairy on the ground, that rudder is huge and it was difficult to track straight. However, got it off the ground more or less in the direction I wanted and noted that the model was distinctly under-elevated. Needed full up trim and holding a little up to keep it level. Elevator was very sensitive so dropped it from medium to low expo/end point and that tamed it nicely. Aileron control was very smooth but the rudder was still very over sensitive.

So Flying around for about 6 minutes just getting the feel for it, decided to land it as light was fading and on the downwind stretch the telemetry kindly gave me a warning letting me know the receiver battery was dying - 2 seconds later no control at all, 2 seconds later - this.

The model went in vertically from about 250 feet.... 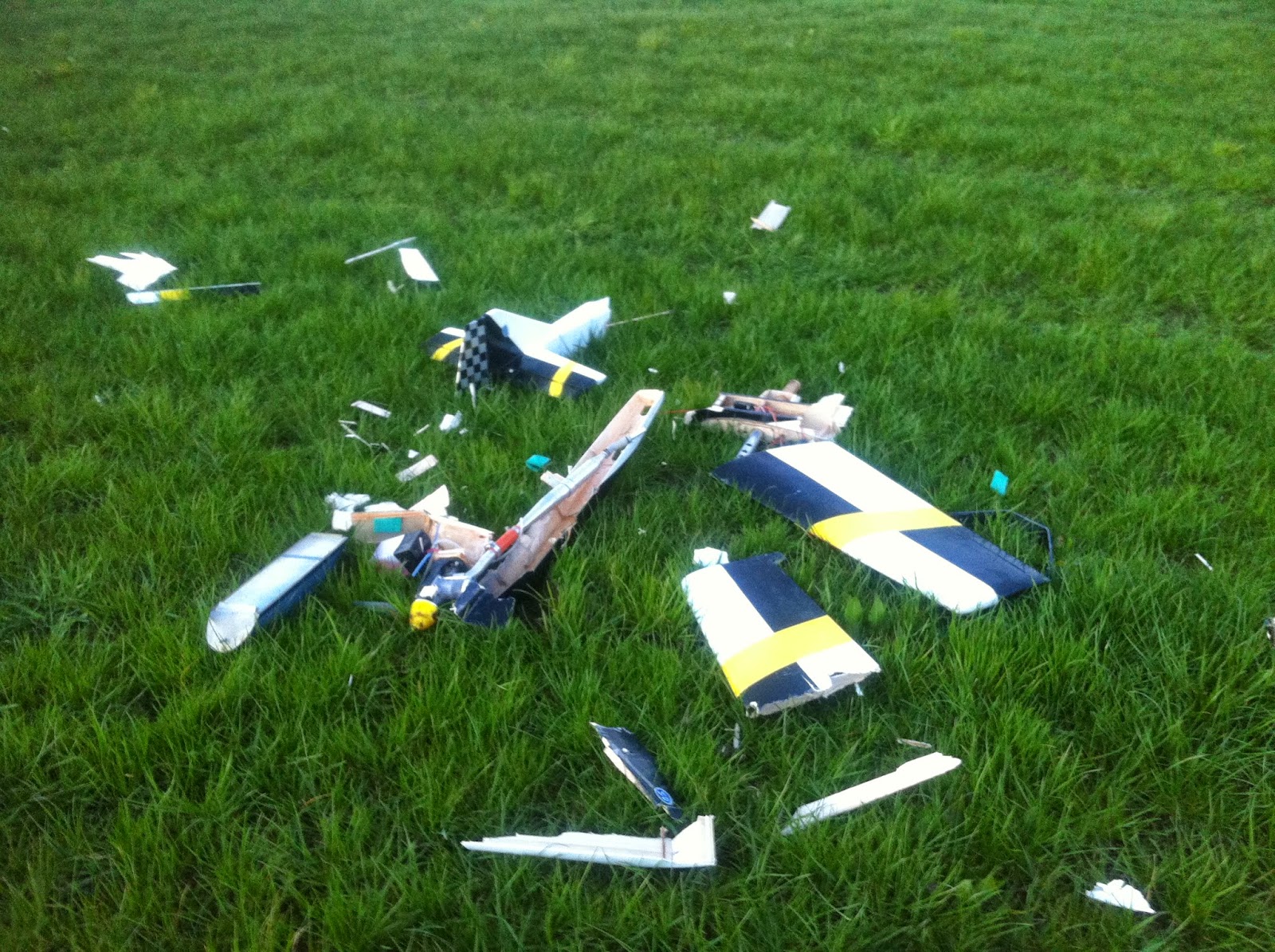 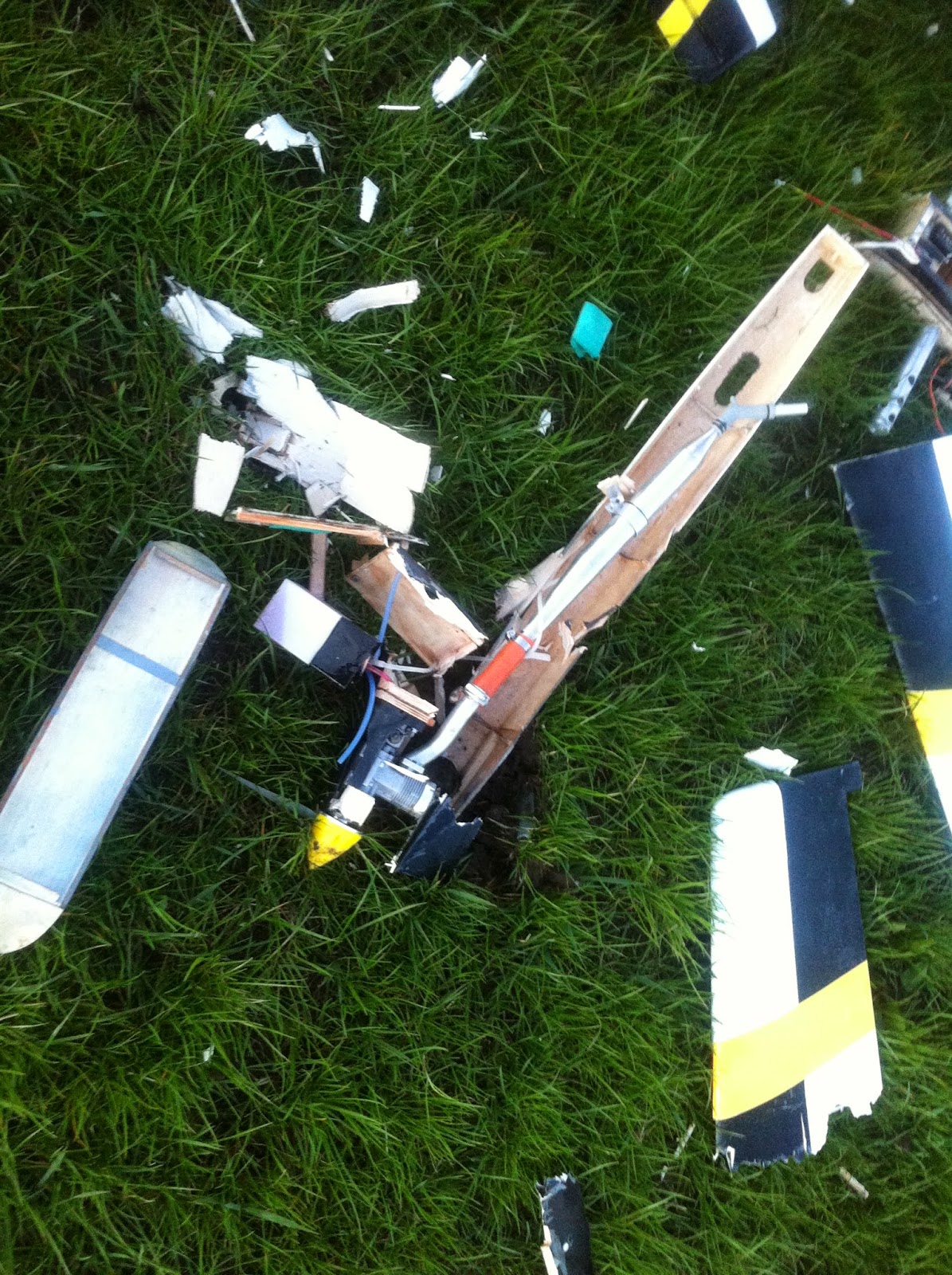 Not much usable airframe left..

The battery was charged just before I went on holiday- about 2 weeks ago. I don't have the luxury of planning my flying, I just have to seize the moment so I tend to keep all models fully charged up.
The battery in the other model that I had taken had died (left the receiver turned on - probably inadvertently knocked the power switch.

So I borrowed the battery from the Concept and had a couple of flights - about 20-30 minutes switched on time.

Then put the battery back in the Concept and turned it all on, ran a tank of fuel through the engine (still running it in), allowed it cool then decided to go for that fatal flight. - Say another 10 minutes..

But, while we were prepping the Telemetry informed me that the battery was low, I realised I hadn't calibrated the battery level. Measure the voltage on my battery checker - 5.5V (NiMh), set the telemetry up correctly - set the alarm to 4.7V - this cleared the warning, we started and went off.

What I had forgotten - probably with nerves as all this was happening and the imminent Maiden, that I was using a 5 cell (6V) battery and it really was very low. No-one to blame but myself.. 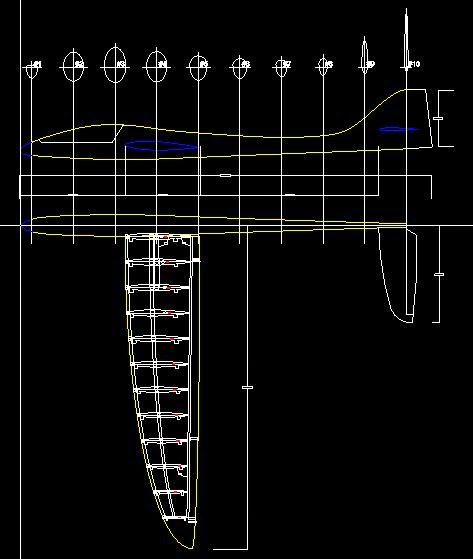 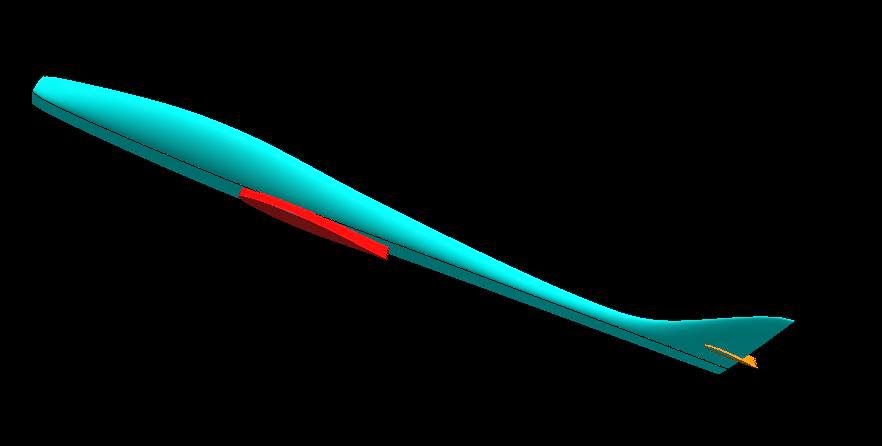 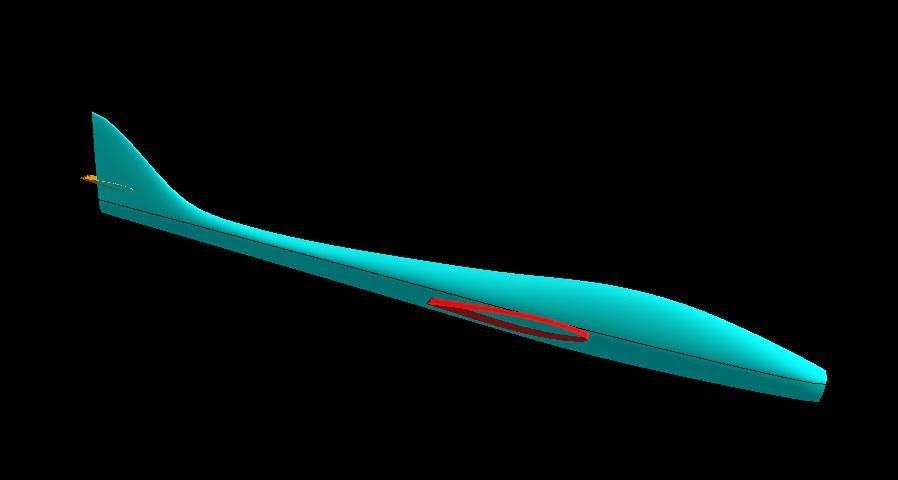