This article was lifted from the Aeromodeller Annual 1972-73 - advanced at the time and still a good reference today.


The modellers who are prepared to make their own polyester fuselages know the type of aircraft they want to build, so we will assume they can carve the master and cast the female mould. We must now consider the question of actual lay-up of the fuselage.

The aim of this article is to give readers as many hints as possible to enable them to go ahead without further undue difficulty.

Moulds are made of the same material as the fuselage, i.e.
1. a base resin,
2. the gel coat,
3. the release agent,
4. the glass-fibre (medium weave: about one mm thick).

The fuselage should be built in a well-aired room. A workshop is the most suitable, but if one is not available, use a room with large windows which can be opened fully.

The principle of construction is as follows:

The fuselage mould is in two halves. The two halves are joined together with bolts, and a band of glass-fibre matting is used to reinforce the seam.

After this, prepare a dose of gel coat and add to this the catalyst. Using a paint brush, apply an even coat of gel over the dry release agent. Too thick a layer of gel coat will impair the solidity of the fuselage.
Leave it to dry for about half an hour, until the gel coat is tacky. While waiting, cut the fibreglass into two pieces sufficient to cover each of the insides of the moulds, leaving a few inches for overlap.
The fibreglass is then applied to the gel coat in the two halves of the mould. Gently rub the fibreglass to ensure perfect adhesion to the gel coat; this will determine the ﬁnal ﬁnish of the fuselage.

Using a paint brush, spread the base resin evenly over the fibreglass, paying particular attention to the seam (make sure the fibreglass does not bubble at this place), and other areas such as the wing supporting ﬂairs, ﬁn leading edge, etc.

Reinforce the fibreglass in those places which are more susceptible to damage, i.e., the nose of the fuselage, the wing supporting fairings and the ﬁn, etc.

Have a sharp knife at hand. When the resin has almost set (when it is ﬁrm] cut away the excess fibreglass. The two halves of the fuselage, though stuck together in the moulds, are now ready.

Now, the two halves must be joined securely.

We have already said it is very difficult to make at clean join at the ﬁn without taking special precautions. Cut bands of fibreglass approximately one and a half inches wide; these are for the seams.

Work through the apertures left at the base of the fuselage for the wing, and at the rear of the ﬁn, using sticks as spatulas and a long-handled paint brush. The fibreglass band must be moved into position while the resin is still ﬂuid.

With the two halves assembled, the job is now three-quarters completed. All that remains to be done is to apply the fibreglass strip to the other seams.

This is a difficult operation due to the lack of access. The band must be rolled up, soaked in resin, placed on the accessible pan of the seam, and unrolled with the aid of a long and curved spatula.
The second “trick” is to put the resin impregnated strip on to a piece of balsa, slide this into the fuselage and tum it upside down so that that strip drops onto the seam.

Once this strip is in position, cut off any excess material.

Leave the fuselage for several hours so that the resin is perfectly dry before taking away the moulds.
Unscrew the mould retaining bolts. With the aid of a screwdriver gently pride the two halves of the mould apart, paying careful attention not to damage the joining surfaces of the moulds.
Gently press away any excess fibreglass along the seam of the fuselage, then wash of the release agent with water.

You now have a fibreglass fuselage.
The back of the ﬁn should be blocked with a piece of balsa and ﬁxed with resin. This will provide a ﬁrm mount for ﬁxing hinges. On the inside of the fuselage, cross ply the matting to aid strength
One might imagine a great deal of work being involved in all this. In fact, the opposite is true!
Once the formers and engine mount are installed,  the rest is easy. Bearing in mind the precision of the mould, the formers can be cut and pierced beforehand - this is, of course, a great advantage.

The fuselage should be rubbed down with a ﬁne wet abrasive material (grade 400) before being painted with Epoxy.

With a little experience. it is possible to build a fuselage in one evening. Cost is relatively little. With this type of material it is possible to build models weighing less than 6.5 lbs, quite suitable for competition flying. The two main advantages, therefore, are speed and cheapness, and also versatility of fuselages thus made. Rounded curves, aerodynamic forms, wing supporting flairs, etc, are difficult to realise: when using only balsa for construction.

Many people decry the use of polyester plastics for fuselages. They say that this type of material gives rise to vibration and interferes with the radio equipment. We do not agree with their views. Vibration has never given any trouble. During many months of ﬂying the author had no trouble at all. The servos were simply stuck to the side of the fuselage on rubber mounts. Reasoning is quite simple: the sides are fairly resilient and quite elastic in themselves.

Gliders, Control-Line and other types


Although the text has so far dealt exclusively with a radio controlled subject, application of the same method could produce fuselages for other types ranging from team racers to slope soaring gliders. In fact, the control line models have a lot in common with the radio example except that they are in general smaller. For some subjects it will he necessary to add extra reinforcement, around tho nose of a glider for example, and also to prepare for removable hatches which will have to he cut away.

As a club project, the polyester fuselage has a lot to commend it. Shared cost of the original carved or plaster shaped master, and the preparation of the moulds, will result in production line procedures which bring satisfaction to a whole group of clubsters. Moreover, it introduces a club “shape" of model - a uniformity that some people like to adopt for identiﬁcation on the field.
Posted by MartynK at 11:54:00 No comments:

This is Hanno Prettner's 1993 World Championship model - scaled down for a piped 40 or possibly a 60 sized 4 stroke,

It results in a model of about 56" span and hopefully quite light. 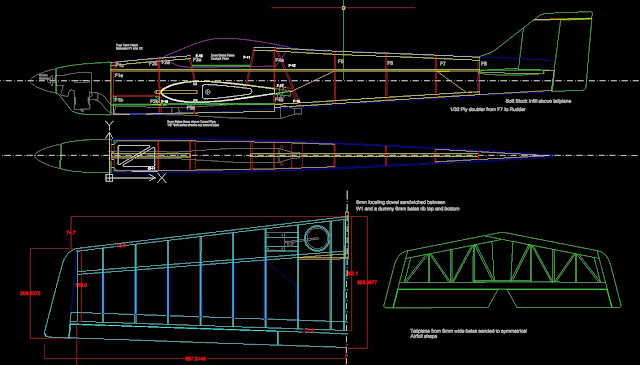 The design was actually pulled together using DevFus for the Fuselage and Profili for the wing. This enabled me to get the shape of the formers exactly right without needing to guess or manually interpolate. 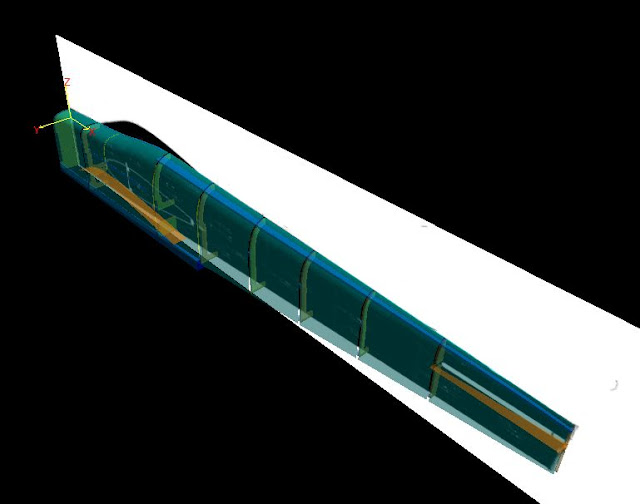 A very slender fuselage and surprisingly deep. Its not really obvious from the until the size of the fin and wing is considered.

The output from Profili and DevFus were combined into a single file and edited using DraftSight. The parts were transferred to DXF and sent Dylan at LaserCraft for laser cutting - Liteply and Birch Ply wing ribs and fuselage formers

So rather than repeat the build blog, just a few progress photos here: 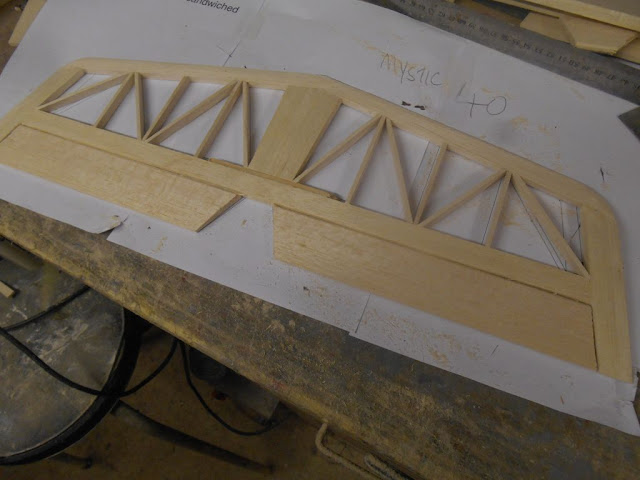 Tailplane construction is quite simple, the trick is to select good quality light wood. Elevator hinges using Kevlar cloth which is what I tend to do nowadays 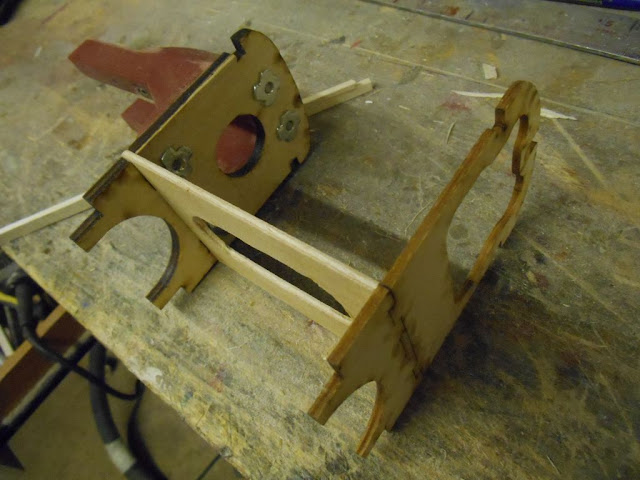 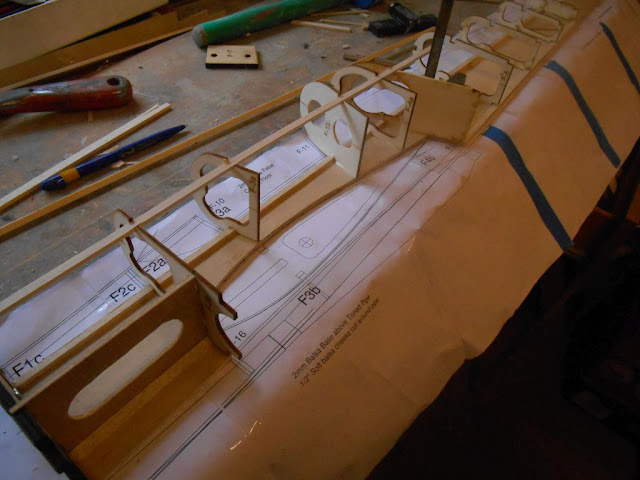 Fuselage construction is quite straightforward 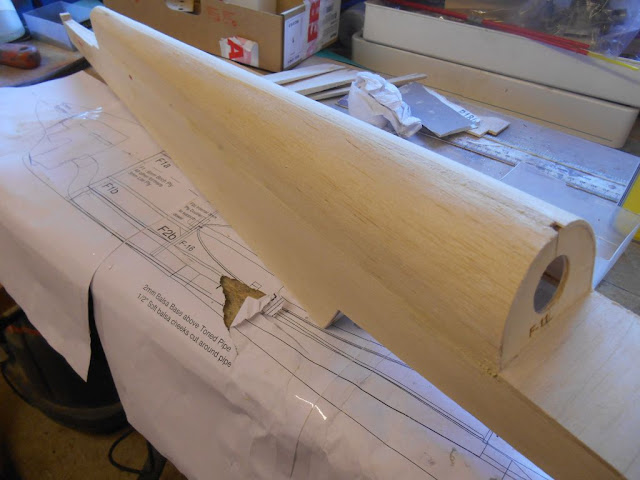 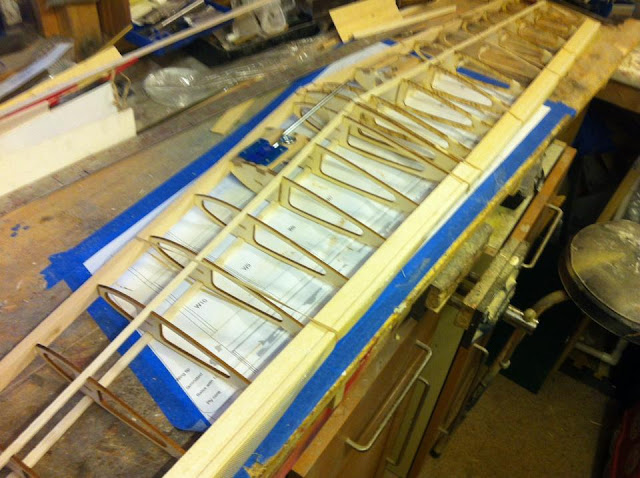 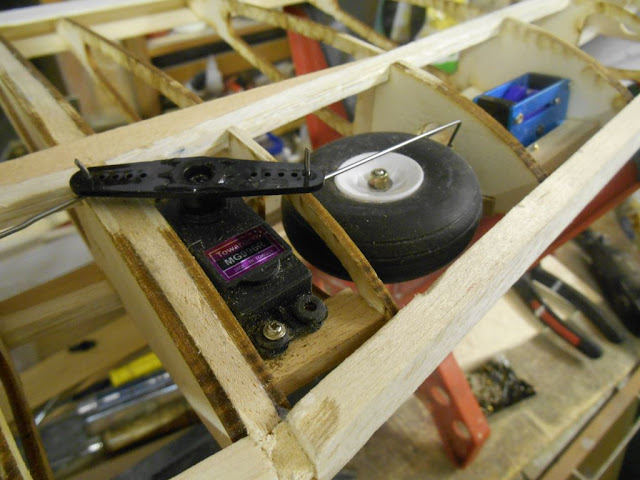 Retracts are HK copies of e-Flite and a cheap MG996 servo used as the retract servo.


And a video of them working 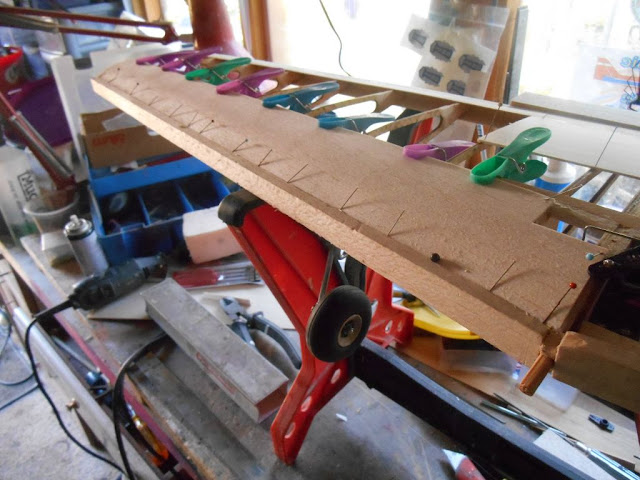 Leading edge sheeting added and a dry fit of the model - looking OK :) 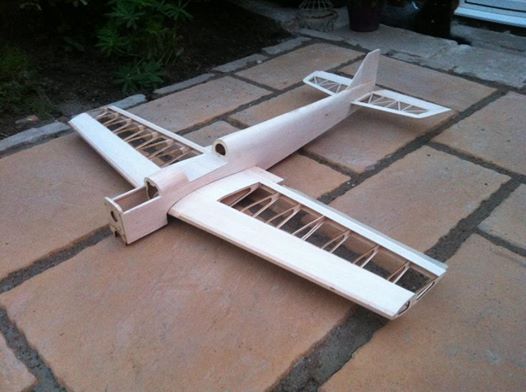 Next bits were the tuned pipe tunnel, ailerons wing tips and rudder 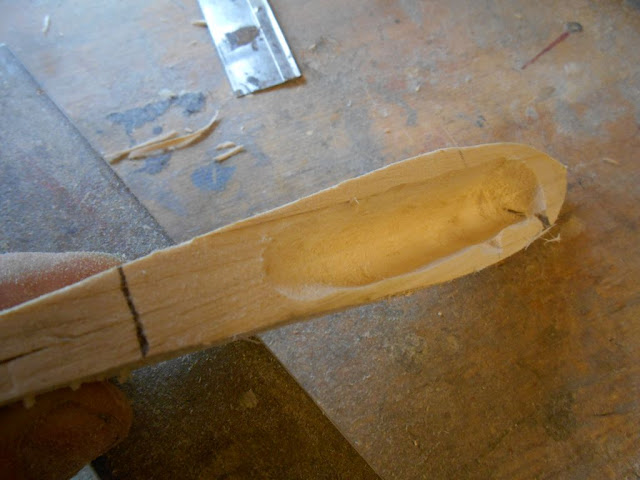 Wing tips hollowed using a dremel and sanding drum after the external shaped had been roughly carved and sanded to shape. A lot more wood than that came out. 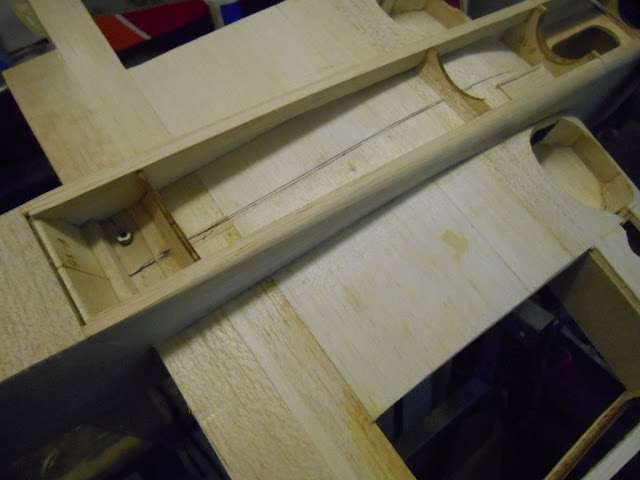 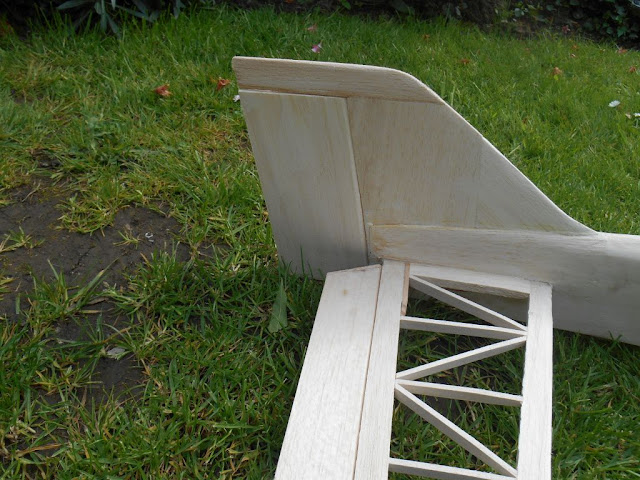 Rudder laminated from 3mm balsa. The fin cap has a 3mm lite ply base to help keep it nice and straight and importantly, add a lot of strength. Balsa on its own is just too fragile 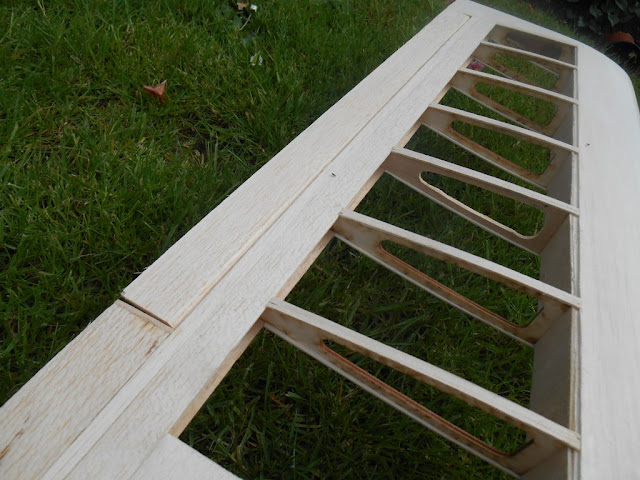 Ailerons laminated from 5mm balsa sheet over the Kevlar hinge. The ends are capped with 3mm lite ply to maintain nice crisp edges 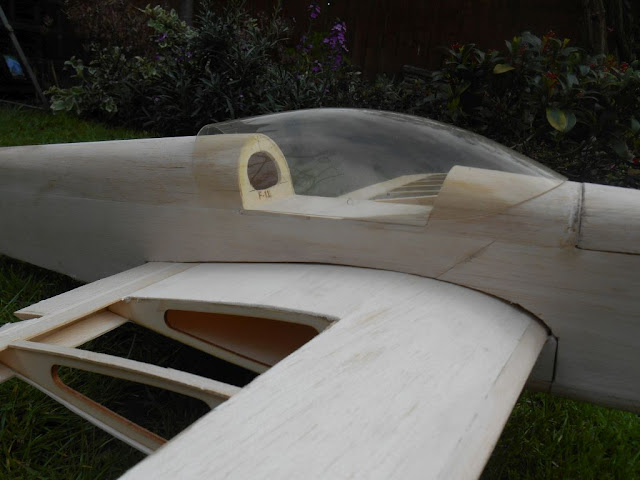 The Canopy came from an old defunct model that lost its life when an aileron linkage broke.. 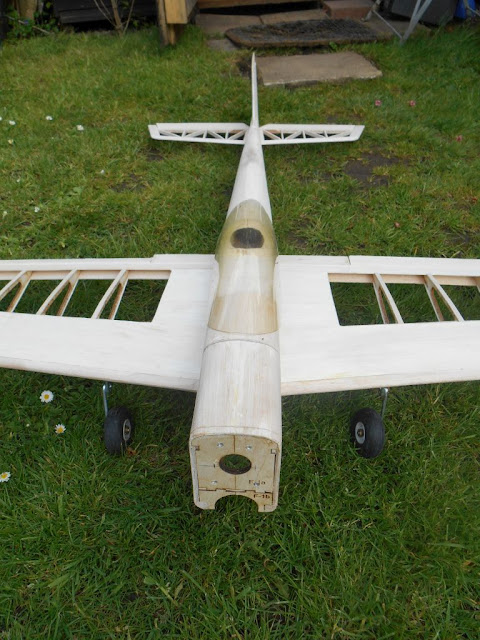