I bought this 35 year old kit at a recent UKCAA event with strict instructions that it had be be built not stored. I remember the kit from a long time ago although I was (and still am) having problems dating it. Estimates are that it was produced from the late 1970's into the early 80's

The kit is a  fairly basic constructional specification, foam wing and a very distinctively shaped glass fibre fuselage. It's quite a small aeroplane - about 52" span and originally designed for a 40. The planned modern 46 will make it very fast flying. 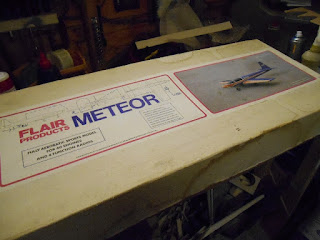 The original box was rather large and was cluttering up my workshop so this was a big incentive to get started. Additionally, I had spare moments available during the Glass Slipper build and the opportunity was too great to ignore it. 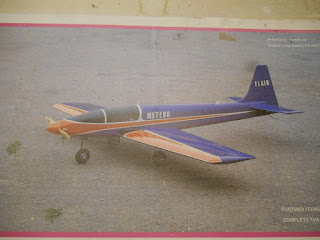 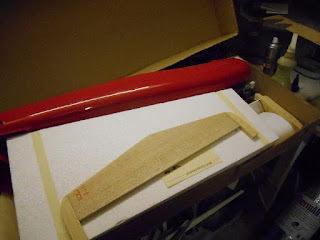 I was quite fortunate that the previous owner had bought some new foam wing cores. The rest of the materials were as original with some beautiful quality balsa - which was very dry. 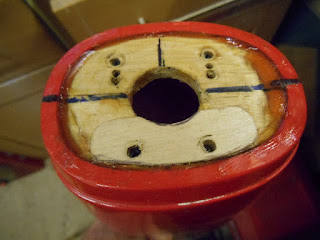 One of the earlier owners had made a start - and a bit of a mess gluing the bulkhead in place. The surplus resin was removed with a Dremel and sanding drum and the former re-drilled to suit an engine mount that fitted my chosen power plant  - an SC46 from my recently departed Gangster 63. You can also see the ply shim added to provide a little right thrust. 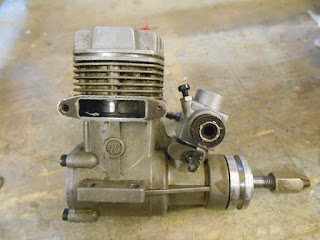 The engine has recently been serviced with new main bearings, has good compression and has so far been very reliable. 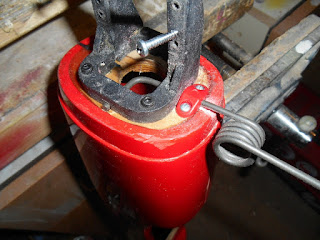 The engine mount held in place with cap head bolts and blind star nuts. The quality of the piano wire was excellent - black - high carbon steel - far better than the rubbish we get nowadays 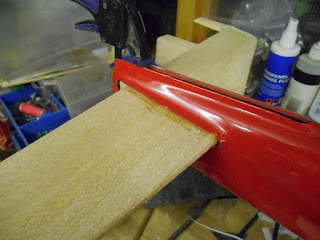 The tailplane was fitted - it was very simple to align as there is no real option - the moulded slot simply fitted and then I added the full length elevator hinge blocks, using Kevlar cloth as the hinge material. The only critical part was getting it centred and also triangulated to the centre at the nose to make sure it wasn't skewed. 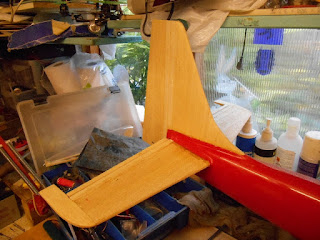 Likewise, the fin, rudder and rudder post simply slotted in and was almost guaranteed to be vertical. Slow setting epoxy was used to hold it all together. By modern standards, the rudder is quite small but I resisted the temptation to increase its size. (For the time being). 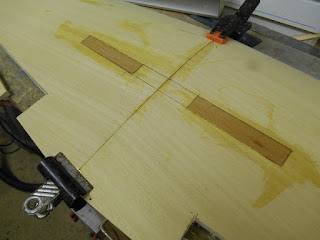 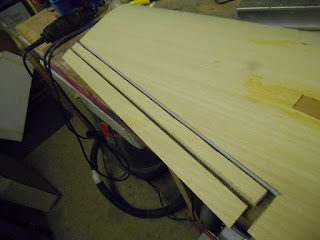 The ailerons were cut out using a band saw with the wing jigged to make sure that the cuts were vertical. The middle piece was removed as this is where the hinge blocks will be fitted. 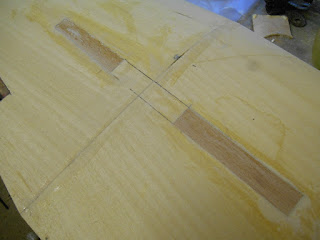 Sanded down ready for glassing 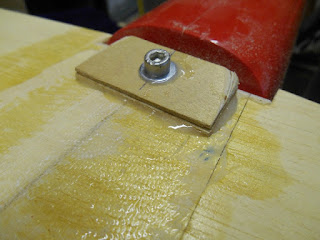 The wing retaining bolt platform is from the kit and comprises of a small length of TE stock and a plywood face. I have replaced the original 2 x M4 plastic bolts with a single M5 steel cap headed bolt 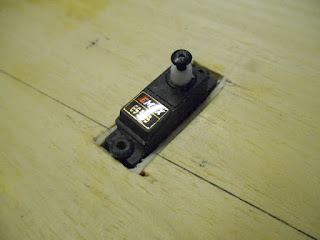 Min servos fitted into the wing and slightly recessed. This may cause some consternation, but the power output of these small servos is far higher than standard servos of the 1980's. 3kg/cm should be more than enough for a single aileron. 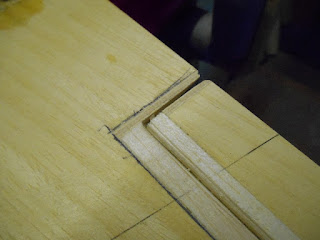 Once again, Gorilla Glue was used to assemble the ailerons, hinge blocks and wing. The ailerons and wing were capped with lite-ply  to keep a nice sharp edge. 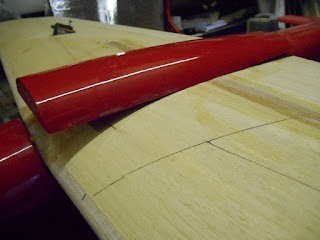 Fitting the belly pan was the only real tricky part of the build. I eventually hand drew a symmetrical hour glass shaped waist  and carefully removed the excess on the bandsaw. I was either a very good judge or very lucky because very little additional fitting was required. 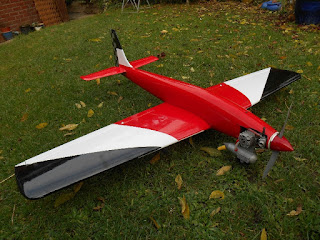 It took a couple of evenings to cover the model, A mix of film from different manufacturers was used - basically, what I had in stock. 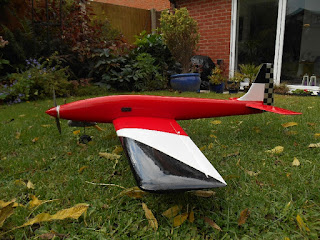 I didn't bother with the outline canopy, I prefer its nakedness and raw elegance. 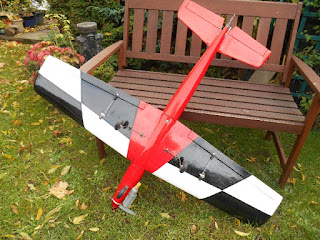 Underneath a different scheme was used - similar to that I used on the Concept. I hope this model lasts a bit longer.

The covering has also been sealed using SolarLac - it helps prevent fuel/oil ingress under the film and keeps it properly adhered. This is quite important around the Glass Fibre to film junctions. In my experience, film does adhere particularly well to Glass Fibre or resin. 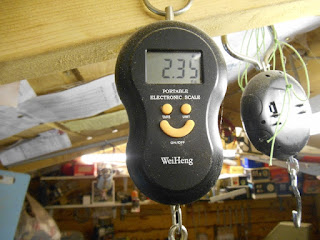 AUW - Dry 2.35kg. About 200g less than suggested in the manufacturers instruction leaflet.

Additional parts I had to supply:

Looking forward to seeing this fly.
Posted by MartynK at 12:15:00