The ailerons are rather thin in cross section and I was concerned that they would be susceptible to flutter. Rather than replace them, I simply trimmed the last 3mm and inserted spruce. 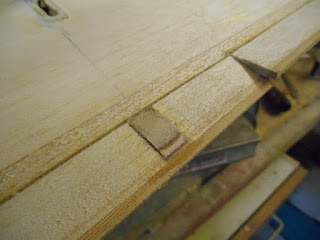 Hard points added and a razor saw used to separate the flap from the aileron.

There are 2 x 12.5mm thick wing ribs that are used to fair the fair the wing into the fuselage. These need to be carved and sanded to meet the complex double curve on the fuselage while still maintaining the correct facing angle to the wing. I almost got it right.

These ribs are faced with 1/16" ply which were glued into place before the carving started. 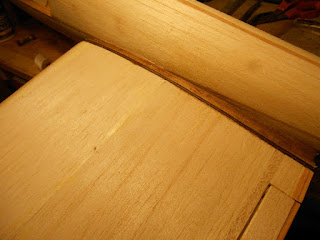 Alignment was carried out is 2 halves using my home made incidence jig to ensure that the wing was at +1.5 degrees 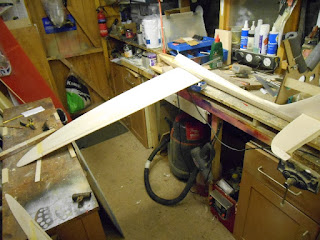 Elevator halves are braced with 14swg piano wire, inlaid into one half and then the other half sandwiched on top. The gaps filled with epoxy adhesive 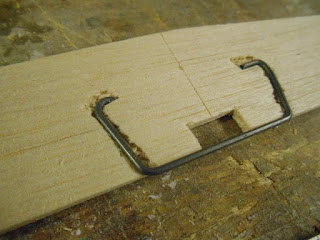 The elevator Kevlar hinge is sandwiched into the two halves and clamped until the glue sets.Note that the elevator halves have not been separated yet. 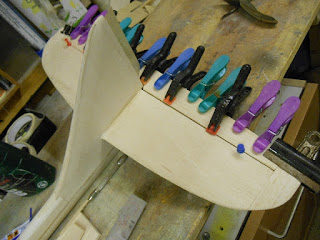 The process was repeated for the rudder

The nose was produced by sandwiching some 6mm ply between balsa cheeks and sanded to shape. Still managing to maintain the design profile. 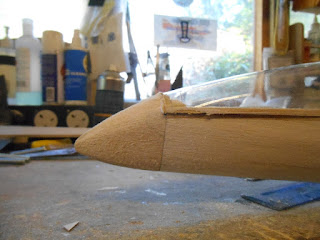 With the fuselage completed, the Fuselage and fin were glassed with 60gm/m2 glass cloth and then sanded back with wet and dry. A couple of coats of primary and finished off with Halfords 'Appliance White' rattle can paint. 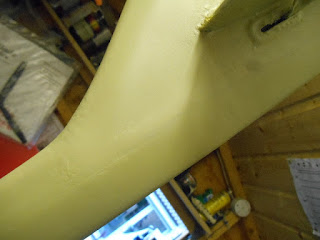 The wings, tailplane and rudder were film covered and after a little work, the model looked like this. 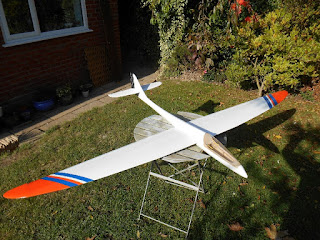 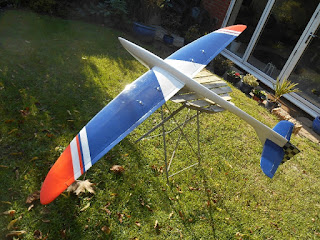 Ian Jones and I went up onto Bosley Cloud (near Congleton). The wind was flat calm at the foot of the hill so we were anticipating a wasted journey.

As we approached the trig point, we could see a couple of models already in the air and we were greeted by a 15mph North North Westerly.

Ian went first - he had brought a couple of foamies.

It needed 2 clicks of right and 2 clicks of down and it was flying straight and level. A tentative waggle of the aileron control to test the responsiveness and they seem OK (the ailerons look rather small) and by now - within a minutes it was probably about 100 feet up and well out from the slope. One of the benefits of a light wing loading and clean lines.

So I whipped it round for a couple of low passes. 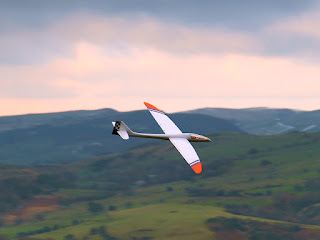 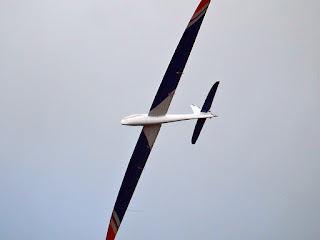 And thanks to Ian, a short video of the event: