Something different for a change. 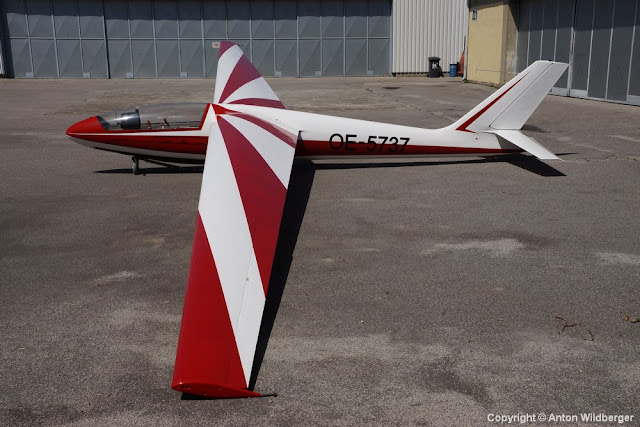 I have always fancied a scale glider. Not necessarily a hanger queen with rivets that I need to count, but something that looks the part and can be flown without too much worry that something may fall off on landing. i.e. a decent stand off scale model.

No plans for this model are available, so working from a 3 view downloaded off the internet, I started work on the plan.

Its a case of design it then add constructional information and changes to the design as I progress, adding detail in case someone else wants to build one. However, due to some CAD issues (not my error), its unlikely that I will release this plan. 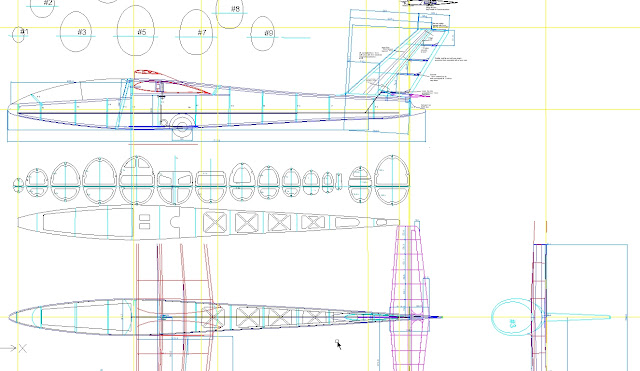 The easy bits were the fin and tailplane and these were built first while the laser cut parts were finalised before being sent to Belair for cutting. 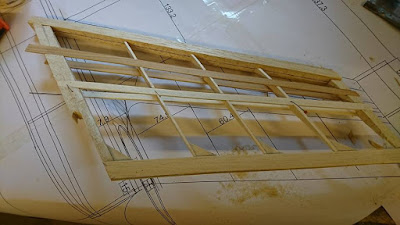 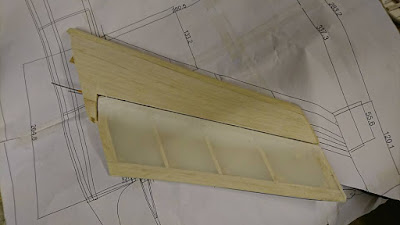 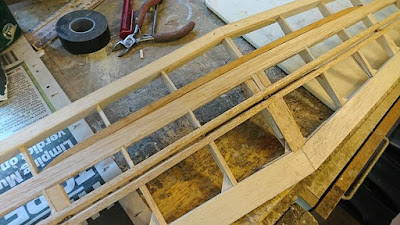 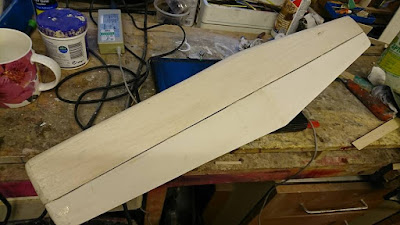 Construction of te fin and tailplane is very traditional balsa and spruce with the balsa sheeted areas covered in light glass cloth but Eze-Kote used instead of epoxy. The elevator and rudder are covered in Solartex.

Fuselage construction is basically 4 of 6mm square spruce longerons and a mix of birch and lite ply formers. The majority of the loads are carried on the former that supports the LE and the main former that supports the wing. Where there are transitions in the longerons, the load is pass to an adjacent part of the structure so - hopefully - there are no sudden discontinuities 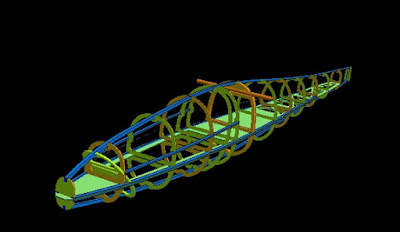 An almost full length deck is used to add stiffness and also ensure that the fuselage remains exactly straight. 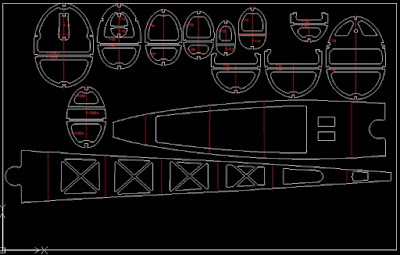 Construction was quite straightforward except that the CAD software had miscalculated the width of the deck (not allowed for the side longerons. This meant that these had to be laminated from 2 of 6x3mm with the deck sandwiched between. Not too onerous to correct. 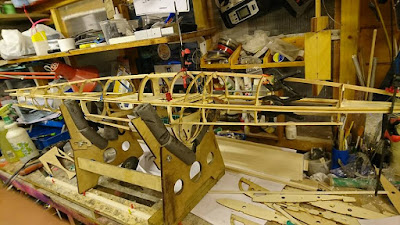 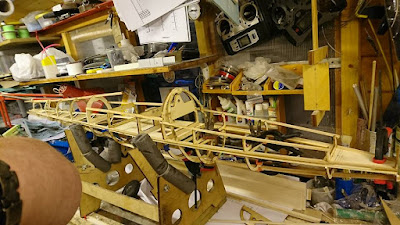 The controls for the rudder and elevator are internal and cannot be accessed once the fuselage has been built so the next job is to fit the fin and tailplane: 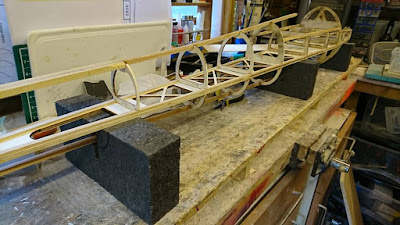 A simple foam block jig holds the fuselage steady while incidence is measured. The tailplane will be placed at +1 deg and the wing at +2.5 deg. I use a smartphone clinometer app (bubble level) to ensure that the tailplane is set correctly. Triangulated using thread to the former behind the cockpit to make sure its not twisted. 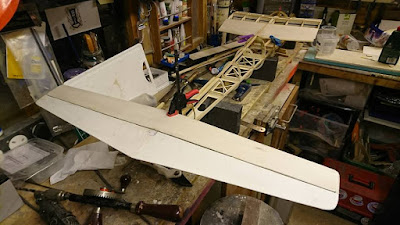 The tailplane needed a small platform from hard balsa to seat the cambered section. This meant the tailplane was lifter about 5mm higher than the scale position.

When dry, the fin was glued into place. This needed a hole drilled in the top longeron (this has 6mm spruce doublers each side to make a wide enough platform for the tailplane and fin to sit on securely).

The fin also has a 6mm dowelling peg to give it a bit more stiffness. 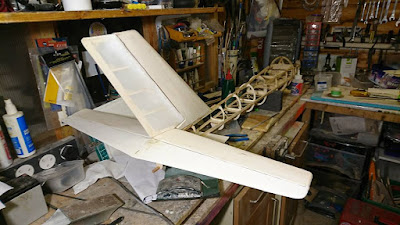 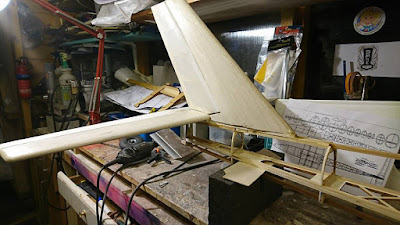 While all this was going on, I started work on the wing. This wing will be in 3 pieces. It will have a composite carbon/spruce/balsa main spar with a spruce rear spar.

The Carbon tube tapers from 10mm (0.5mm wall thickness) at the root to 7mm at the tip in equally spaced step (10 > 8 > 7). This is supported at the root area by a soft 12mm balsa 'web' (grain vertical) epoxied to the carbon then a 12x3mm spruce top and bottom cap. This will taper to 6x3 at about 80% wingspan. The Joiner is a 9mm carbon rod. Te rear spar is 6x3 which delimits the ailerons and the spoilers with additional support in the root. The main dihedral brace is 6mm marine ply which tapers slightly to fit with the sweep forward of the main spar.

The centre section is about 600mm wide, the outer panels one piece..

Assembly is simple but slow as all the balsa blocks have to be cut and filed to shape. Drilling causes the soft balsa wood to split. 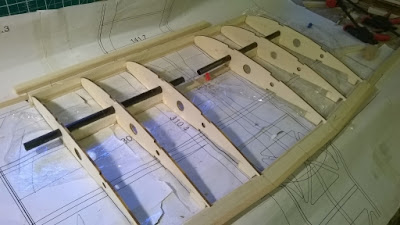 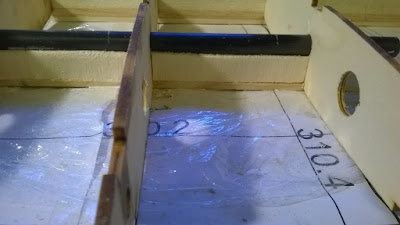 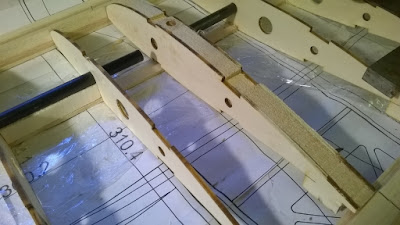 The root rib as 12mm balsa with ply sides. The wing joining block just behind the main spar is beech and is recessed to carry a M5 steel bolt 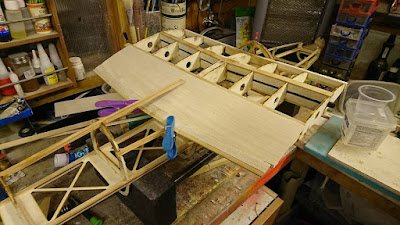 The wing centre temporarily pegged into place whil the tailplane was aligned.